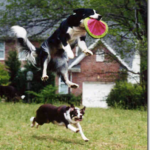 Many people will agree that dogs give us so much more than we feel we have given them. I can’t imagine my life without them. Here’s how it began:

When our son Will turned four he wanted either a baby sister or a puppy for his birthday. It was hard to whip up a baby sister, so he got the puppy instead. Meness (a makeup name for an imaginary playmate’s imaginary playmate) was a blond cocker spaniel who was Will’s best friend for fourteen years. It was difficult to lose such a long standing family member. It took two years for our hearts to heal enough to consider another pet.

After a lot of research we decided that our lives were suited to a different breed and Border Collies have been a big part of our lives since 1989. Our first Border, Mik, was killed on Christmas Day, 1992. Bill and I were so distraught; we sought the company of another dog right away.

We found Trek who came from good working dog lines. This was the beginning of a long journey which lead us through many wonderful experiences and learning just how amazing these dogs are. Trek’s father was a sheep dog trial champion from Wales (smooth-coated red dog). Having never been to a sheepdog trial, we took our puppy to a trial in Pittsboro. She stayed glued to the fence the entire time! Her eyes followed the sheep up and down the field. We thought perhaps she might have some of her father’s instinct, so we took her to a trainer for assessment. Kent Kuykendall thought for sure that she would make a fine herding dog, but needed to grow up a bit, and be exposed to livestock. We began working with Trek, attending workshops and private lessons. Trek was bred to Bill, Kent Kuykendall’s Purina Champion trial dog in 1995. Ceilidhe was the runt of the litter. When it was time for us to choose the puppy we wanted to keep, we let Trek choose! We let Trek play with each puppy individually, and then all together. The puppy she played with the most was Ceilidhe. Trek and Ceilidhe both were great sheep herding dogs for a few years.

We bred Trek to Bill (the dog) again and kept two puppies from the second litter, Star and Tre,thus our family of BC’s grew to four! We raised the canine family here at Little Lake Hill, running through the grounds, swimming in the creek and enjoying life. Losing Trek in 2009 was in no way preparation for losing three of her children. Ceilidhe was nearly eighteen when she died in 2013. Tre died on Christmas Eve, 2013. Each ‘child’ is different and parting with them individually has been difficult in its own way. I wrote songs for them and put some to videos:  Rainbow Bridge Song – https://www.youtube.com/watch?v=FBoDAxeQ45o- and All the Tears in the World – https://www.youtube.com/watch?v=ft-JeAJ8HnI – . If you watch them you see photos of our lives together.

Star was the last to go. She passed in January 2014. It snowed the day she died. She loved the snow. Losing four dogs within such a short period of time took a while to process. Bill wanted another dog almost right away, but it took me longer to be ready to adopt another furbaby. When I was ready in 2016 we decided that another border collie would bring new life to us. After searching for months for a puppy from a working background with little luck, I had a dream on September 9th that we bought a BC puppy from a man we used to herd sheep with twenty years prior. Dr. Ben was a veterinarian in the western part of the state and easy to find. When I called and asked if he ever bred his dogs and sold the puppies, he said “No, I only breed them when I need a youngun’ to work the farm.” He hesitated for a few seconds then added, “I’m expecting a litter next week.” He had not even told anyone about them, so we were first in line after his pick of the litter. We met the puppies when they were a few weeks old. There were only two of them. Ben was partial to the female and the male was more playful with us, so that suited fine. When we asked to see the parents’ lineage to help choose a name for our pup we learned that his great-grandfather’s name was “Moss”, which is Bill’s mother’s maiden name. This entire story is so serendipitous; I had to write a song about it! “My Dog Moss” has been a tremendous hit on radio since the release of my eighth album “AT THE END OF THE DAY”.  “We don’t realize that we’re lost and so alone, until the lucky day when we bring a puppy home. That dream in mid-September lead me to believe, there’s something more than magic that brought him here to me.”

Moss is athletic and very bright. We hope he will gather sheep as well as he gathers balls!

We have lived, learned and loved so much in our journeys with dogs. We have had many wonderful experiences, but nothing will compare to the memories our dogs have given us.