After learning about the Cape Hatteras Lighthouse to write a song about it, I became involved with the Outer Banks Lighthouse Society. I served as president of the Society for ten years. After enjoying a break of nearly five years I am back at the helm to help oversee some special projects. One of our main goals is to educate as well as preserve. I enjoy speaking to 4th graders in my vicinity (Wake and surrounding counties), and other community organizations who want to learn about our magnificent towers. Contact me at bett@oblhs.org if you are interested in a presentation. It is wonderful to be in touch with our members again. For the entire story of how it all began, keep reading:

While noodling around with a new tuning on the guitar one day in 1997 words came to my mind. They were, “I am a lighthouse”. I had no idea why those words came to me, but it must have been from reading news articles about the Cape Hatteras Lighthouse in Buxton, NC. The encroaching shoreline presented a dilemma for the Cape Hatteras National Seashore. At one time the waves literally crashed into the lighthouse. And many years ago the tower was closed totally and was not used to guide mariners away from our coastline and the dangerous waters of the treacherous Diamond Shoals. I realized then that these words, “I am a lighthouse” must be about the Cape Hatteras Lighthouse. I continued learning more about the lighthouse and the families who lived at the lighthouse and became more involved. I learned more about the sea encroachment on the lighthouse. Adding jetties (which was illegal in NC at the time) would cause erosion further south which was not a suitable fix. The National Academy of Sciences produced a study stating that the Cape Hatteras Lighthouse, which is the tallest brick lighthouse in America, could safely be moved. The Outer Banks Lighthouse society (non-profit formed in 1994 www.oblhs.org) was in complete agreement with the Academy’s study.  My song “I am a lighthouse” was told from the viewpoint of the lighthouse itself, the history it had seen over the more than 100 years at its present resting spot since 1870. I sent a copy of the song to the OBLHS and told the board they were welcome to use the song to help raise awareness of the situation. I was stunned when I received a phone call from founder Bruce Roberts asking me to make a professional recording and send it to every NPR station in North Carolina to help make people aware of the controversy in how to save, or whether to save the lighthouse. So, I did just that. The song was played on several stations in our state for many months. 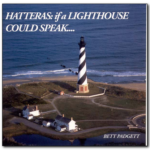 When I learned that the government had appropriated money to move the lighthouse and surrounding living quarters I reached out to the National Parks Service and the NC Arts Council about producing an album with more songs about the lighthouse. The idea was well received and I got to work on what was one of the most exciting music projects, and wonderful life-long memories I will ever have. Trips to the lighthouse lead me to meet people who had grown up with the lighthouse. They woke up to the light shining in their windows, getting engaged there, getting married there, christening babies there. This lighthouse is where they gathered for family reunions, where the children grew up playing. I clearly understood why moving the lighthouse would rock their world. Seven songs were written ranging in many styles, telling stories that came from the local people, using the engineers’ descriptions of how the lighthouse would be moved, poems written by a light keeper’s son, and finally in celebration of the historic relocation.

One of my biggest honors ever was to be invited by the NPS to sing at the relighting ceremony when the tower had been firmly placed in its new resting place, ½ mile inland and clearly the greatest engineering feat of the 20th century. The fall 1999 OBLHS newsletter says, “Bett Padgett spoke in smooth tones to the audience, saying how happy she was to be at this event & to rekindle our Fair Lady. Padgett gave an outstanding performance of two songs from her CD “If a Lighthouse Could Speak”; singing in tribute to the Light. In her reverent song If a Lighthouse Could Speak (same name as the CD) she sings of the lighthouse’s fear if it isn’t saved, “Will the spirals on my body fade into the tide?” And in the irresistible, rhythmic song, “Our Lighthouse”, she sings of the happiness for those who will climb the tower in the future and who will see Buxton and the Atlantic, all around, because we’ve moved our lighthouse inch by inch, brick by brick.”

Learning to love Hatteras Lighthouse and the work that he OBLHS had done drew me to learn more about all of our historic towers. After joining the Society in 1998, I served as president beginning in 2004 for ten years and am still active on the board. We stood by the Outer Banks Conservationists during their battle with the county for the stewardship of Currituck Beach Lighthouse which the Conservationists restored. We worked tirelessly with the National Parks Service and Department of Interior to obtain funds to restore Bodie Island Lighthouse and helped the NPS host three homecomings for lighthouse keepers descendants. OBLHS published oral histories of the stories told to us at these reunions. I continue to serve OBLHS as the chair of outreach and engagement and give presentations to adult groups as well as school children in North Carolina. I learned many more stories and history of our towers and have written songs about every lighthouse in North Carolina. Everyone loves lighthouses. Visit them, they belong to us.